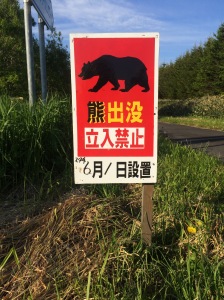 Having planned to camp in Hamatonbetsu we were told on arrival that the campsite was closed because a bear had been seen in the vicinity and it was too dangerous. In some ways this is a good thing. We are now staying in a simple guest house down a dirt track on the edge of town and will have a warm bed tonight. It is still freezing here and today at lunch time, on a bright and clear sunny day, it was only 10 deg C. Again the wind was like ice and my shins and toes were numb most of the day as we pedalled south-eastward along the beautiful coast. If we’d camped it would have been a bitter night but this can now be avoided.

We’re in dairy farming land where most of the milk, butter and cheese is produced and the landscape is like no other. The trees have thinned out to be replaced by huge expanses of waving dwarf bamboo with grassfields in between. The cattle are mostly kept indoors in sheds so it is always a nice surprise to see a field with a few cows in them.

This evening we’re having baths and dinner at the Onsen, a habit we are really starting to settle into!

One thought on “Bears and Milk”